Some people may not understand why I picked this strange shade of green for my blog.  These photos may help explain.  We still have an opening, if you are a qualified diver (see employment post) give us a call! 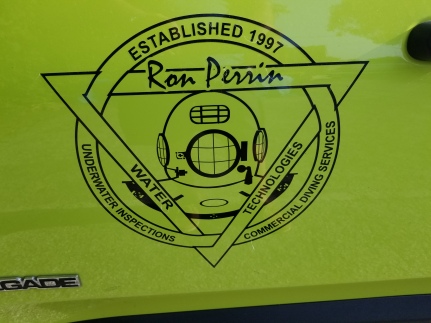 Multiple USEPA White papers have documented that bacteria, protozoa and even viruses can use the sediment that accumulates on the floor of water storage tanks as a habitat to grow and become a problem in water systems. One of these papers was published on June17, 2002. Titled

Many studies have identified microbes in accumulated sediments, including both pathogens and non-pathogens. These include bacteria, viruses, protozoa, algae, fungi and invertebrates. Opportunistic pathogens that have been detected, and can multiply in sediments, include Legionella and mycobacteria (van der Kooij, 2000). Some primary pathogens can also survive for some time in sediments. Hepatitis A virus survived more than four months in sediments at both 5/C and 25/C (Sobsey et al., 1986). Other opportunistic pathogens found in sediments include Pseudomonas fluorescens and Flavobacterium spp. (Berger et al., 1993). Sediments can also release nutrients into the water which stimulate biofilm growth downstream (LeChevallier, 1999b).

The paper explains there is steady inflow of bacteria, fungi, protozoa, algae, nematodes, and other microorganisms enter the distribution system.

We often find that some of the deepest sediment is found in the smaller storage tanks. Our cleaning service is priced right. We clean tanks from 3,000 to 30 million gallons. Give us a call at 817-377-4899 and we will give you a proposal designed for your specific tank.

Have you cleaned your water storage tanks lately?

It is amazing how many water utility professionals do not understand the threat of sediment build up in the interior of water storage tanks. Potable water tanks and towers accumulate sediment over the years they are in service. We often see tanks (weekly) that have never been cleaned. The EPA has documented that sediment in a storage tank may become a habitat for bacteria, protozoa and even viruses. Keeping your storage tanks clean should be a scheduled procedure for every water system. Unfortunately, the smaller water utility systems with fewer resources are where we see the most need. Tanks in smaller systems are much more likely to go longer between cleanings, or just never be cleaned at all. Check out our web site: www.ronperrin.com

Our crew is at our best cleaning and inspecting water storage tanks and towers.

If your tanks have not been inspected this year please call for a free quote. We offer diver, ROV or a lower cost underwater camera option.  We are sure to have a comprehensive inspection that is right for you.  Call today 817-377-4899.

Check out our new web site at www.rpwt.us

Clean your water tanks.  No mater how you do it Cleaning your water storage tanks is important.  Soft sediment accumulations on the floor of your water storage tank can be an inviting habitat for bacteria, protozoa and even viruses.  Keeping your tank clean will improve water quality, lower chlorine cost and reduce the chance of a RTCR violation.

Still not sure you need to clean your tank?  Call us today to schedule a comprehensive inspection that will include an underwater video.  See the floor of your tank on DVD. 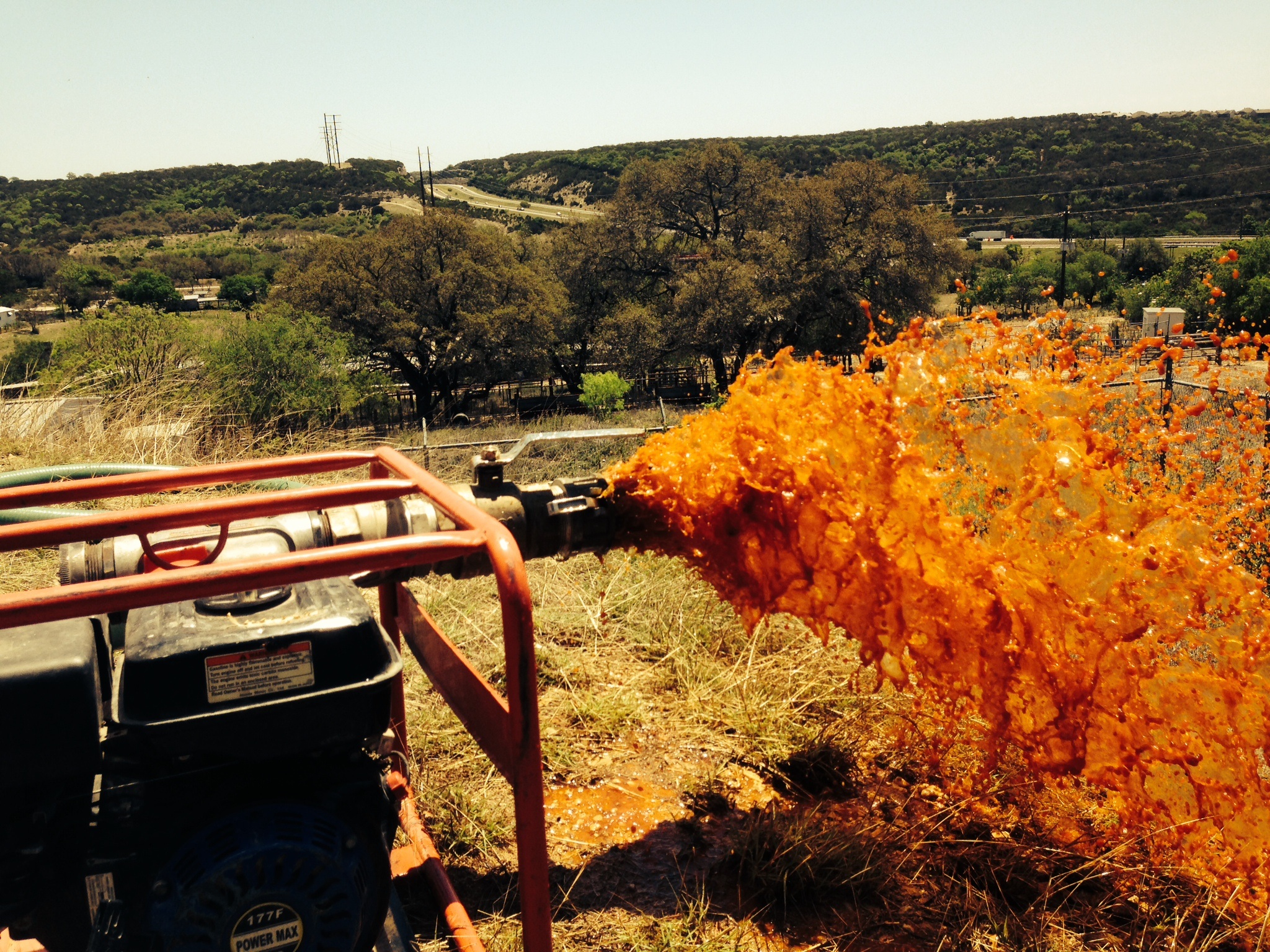 Texas Water Tank Inspection and Cleaning.  Every Day our crews are serving Texas water utilities with our inovative underwater inspection services.  Our inspections are done with underwater cameras so there is no water loss.  Our cleaning services are primarily done with a commercial dive crew that is able to remove sediment from the floor of your tank with minimal water loss and usually no disruption in service! 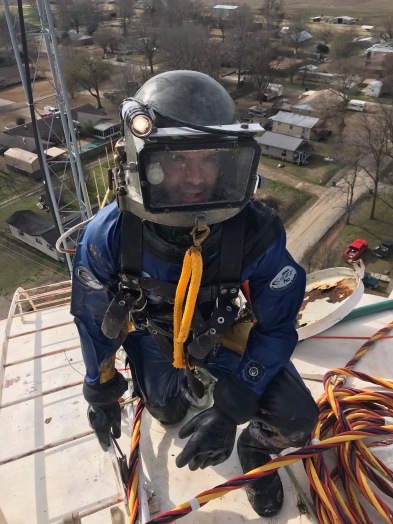 Our first dive of 2019 and another water tower is clean.  We were able to remove all sediment from the floor of the elevated tank, leaving nothing but clean drinking water.

You may ask why this is important?  Water is treated before it is stored in tanks and towers.  This is the last stop water makes before being served at your tap.  Over time, storage tanks accumulate sediment.  Sediment on the floor of of the tank can be a habitat for a wide range of contaminants.

According to the CDC some of the top causes of water-related diseases and contamination outbreaks in drinking water are:

These living contaminants can use the sediment to hide from treatment chemicals, growing and becoming a threat to public health.  A qualified diver sealed in a dry suit and then washed down with a chlorine solution, to meet AWWA guidelines, can enter storage tanks and clean the floor while the tank remains full of treated water.

This saves the water utility Time, Water and Money!  Make 2019 the year you clean your water storage tanks so your community has the BEST QUALITY WATER POSSIBLE! 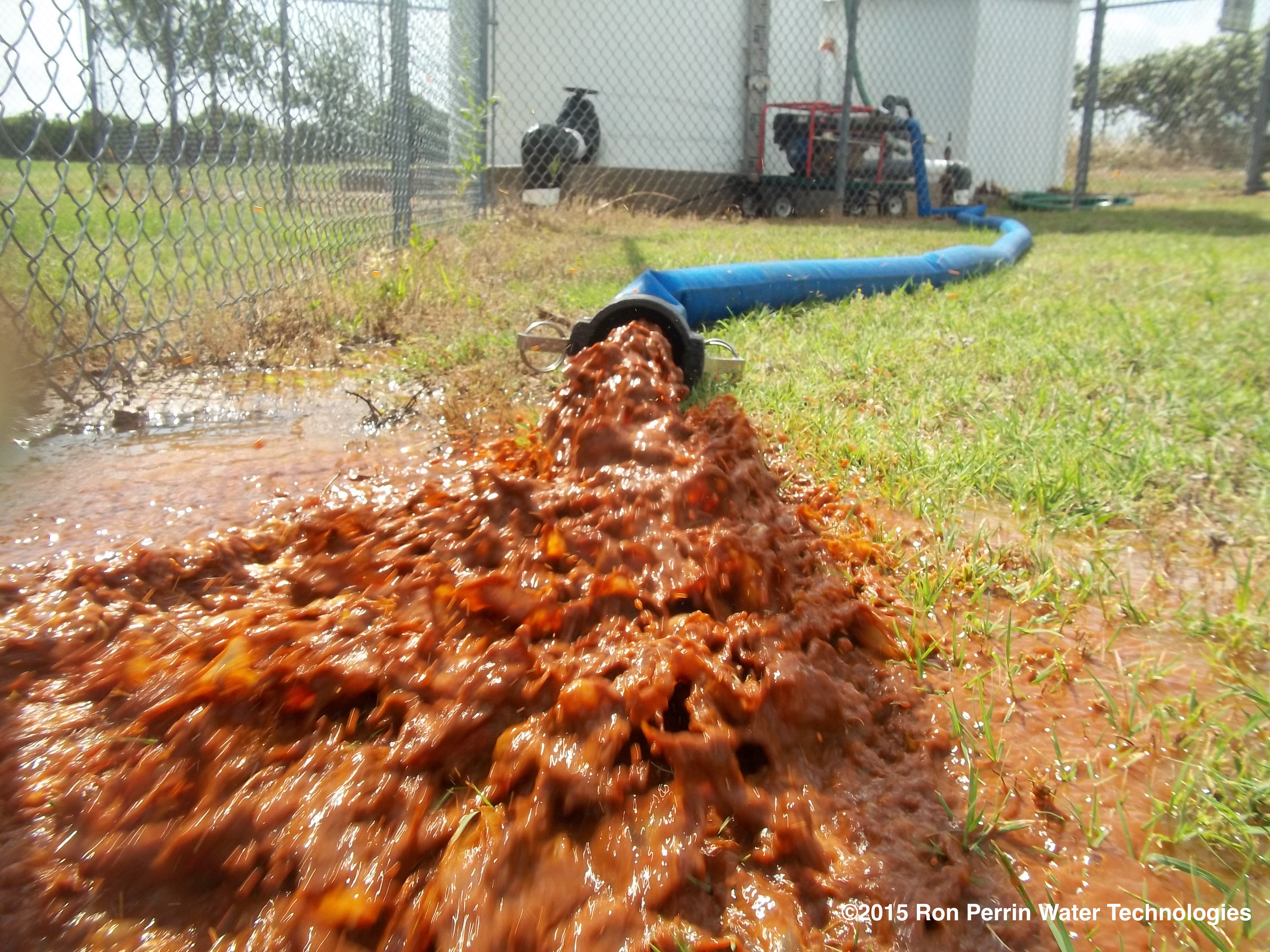 Water storage tanks and towers are assets that represent a major capital investment. In 2015 I developed a class for the Environmental Training Institute at The University of Texas at Arlington. The class, “WTR 308 Potable Water Storage Inspection Techniques,” is now being offered for the fourth year.  The class covers how common contaminants that may be found in potable water such as Legionella bacteria and Cryptosporidium can use tank sediment as a habitat to grow and become a public health threat.

The course also looks at new threats like Naegleria fowleri.  In August 2013, the death of a 4-year-old boy near Violet, LA., was linked to the Naegleria fowleri amoeba. The child had been playing on a backyard slip-n-slide that used water from the St. Bernard Parish public water system, that was later found to be contaminated with the amoeba. The class covers basic safety procedures when inspecting water storage such as safety issues associated with working in confined spaces and working at height. The course also covers inspection strategy development, selection and use of underwater cameras, sediment sampling devices, gas monitoring instruments needed for human entry into the tank, and best practices for inspection documentation. To enroll contact the UTA Environmental Training Institute at 866-906-9190.

Lets start with the first one. Is Giardia living in your water system?
According to the CDC Giardia is the most common contaminant of potable water systems.  Giardia is a microscopic parasite that causes the diarrheal illness known as giardiasis. Giardia is protected by an outer shell that allows it to survive outside the body for long periods of time and makes it tolerant to chlorine disinfection. For more see The Tank Diver Blog.  Here:  http://wp.me/P4G0Q-qb1 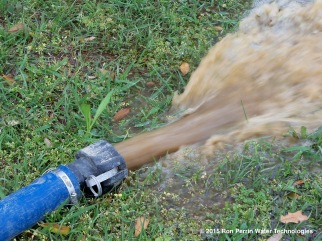 From The Tank Diver Blog www.thetankdiver.com To go straight to the page click here:   http://wp.me/P4G0Q-qb1

If you need assistance inspecting or cleaning water storage tanks or towers call  Ron Perrin Water Technologies toll free at 1-888-481-1768.
For a fast quote Fax your tank information to 817-246-1740. 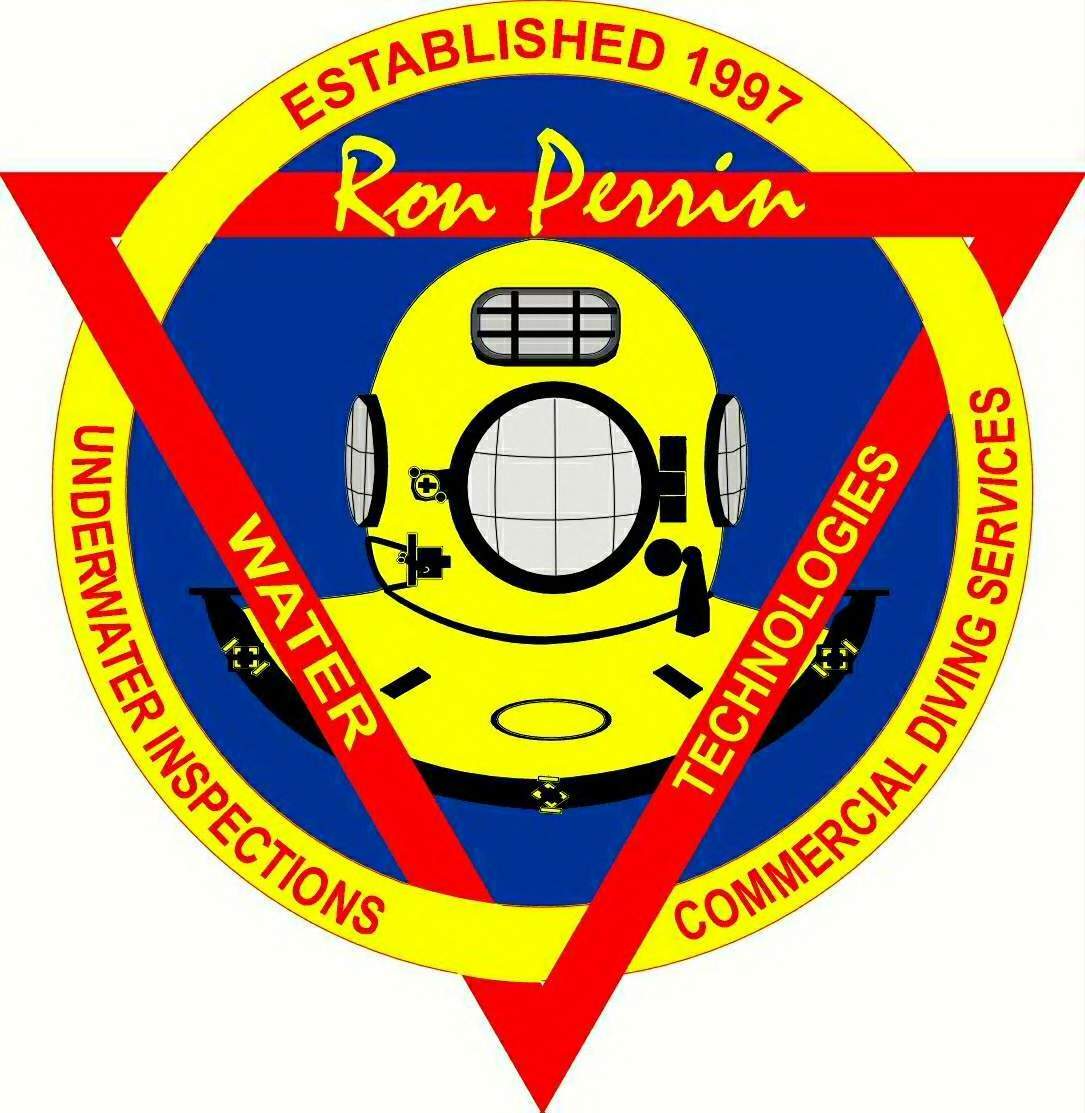 Call us today for a proposal to inspect or clean your potable water storage tank or tower. or send us your contact information along with tanks sizes and types to tankinspections@aol.com or Call us toll free at 888-481-1768 or if you need an inspection quote simply fill out the form below: (C)Ron Perrin 2014 INSPECT YOUR OWN POTABLE WATER TANKS 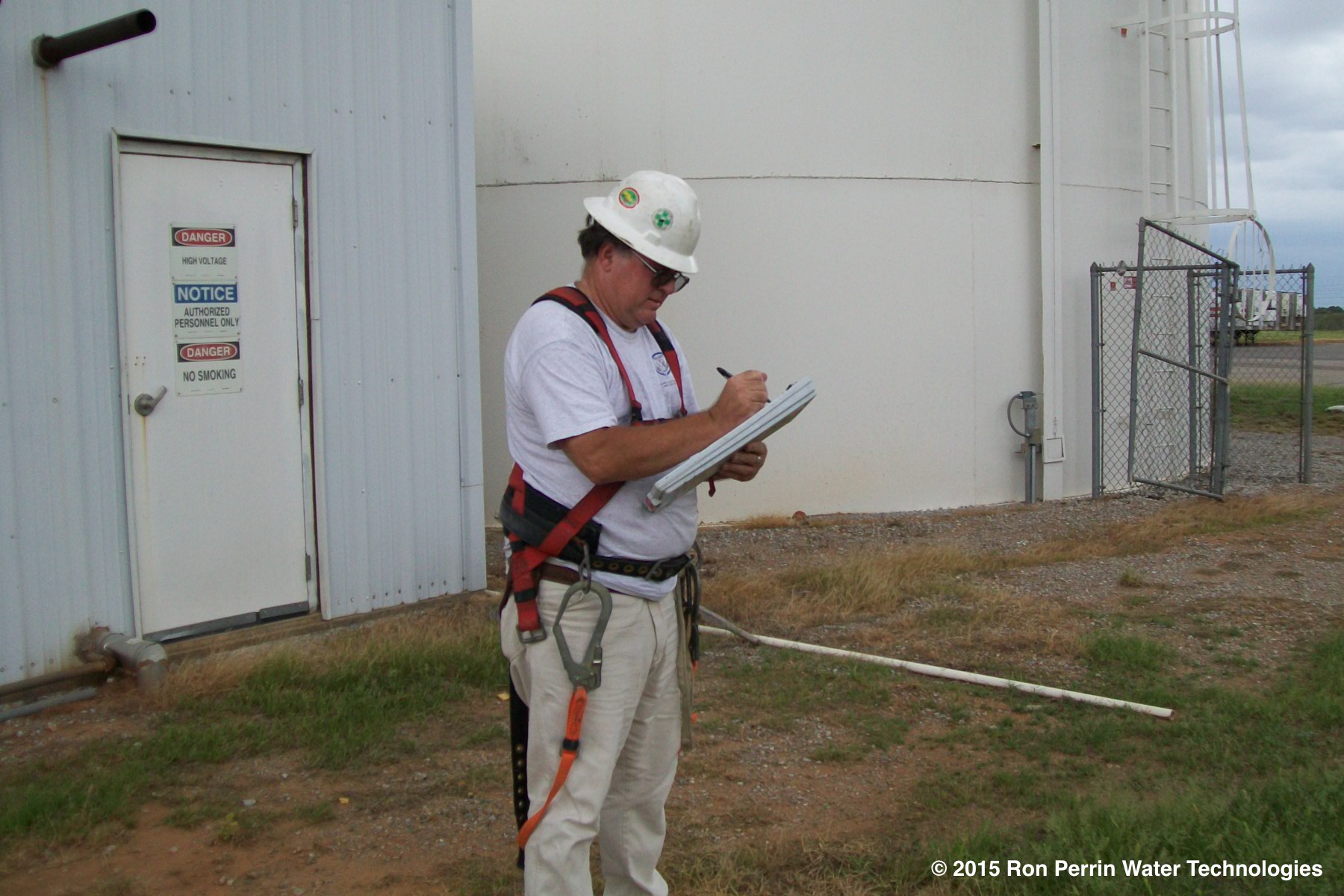